Neaux is the new band featuring Nick Fit of Trash Talk and Sierra Kay of Versa Emerge. Rich in atmosphere and songcraft and full of aggressive energy,Fell Off The Deep End gives a nod to shoegaze, Sonic Youth, and Bl’ast in equal measure. Originally released on cassette in late 2016, Fell Off The Deep End was remastered in 2017 with new artwork and is now available on vinyl, cassette, and digital.

The partnership behind Neaux got its start when Sierra Kay’s and Nick Fit’s previous groups, Versa Emerge and Trash Talk, appeared at the same Warped Tour dates, meeting shortly before Fit was kicked off the tour. Years later, Kay wanted to start a new project, reached back out to Fit, and a musical and personal bond formed quickly. The band describes themselves as "old friends making new noise," but what a potent noise. Take Fell Off The Deep End opener "Slowstroll,” which announces itself immediately with both delicacy and heaviness. There’s a weighty crunch to the sound that recalls 90s grunge and alt-rock, yet, Kay’s clear and expressive lead vocals and aggressive vulnerability ensures fans of Slowdive and PJ Harvey can find space in this music. Elsewhere, the young band ably conjures up druggy, droning balladry ("High Hopes") and catchy post-punk ("Beaten Bruised and Over It"). The band’s hardcore background shows up, too, as when the pummeling "Somewhere Up North" kicks up the tempo several notches.

The members of Neaux – Sierra Kay, Nick Fit – may have cut their teeth in projects ranging from synth-pop to hardcore punk, but Fell Off The Deep End’s rewarding collision of worlds yields a captivating new sound. It's the sound of restless emotional territory, of punk looking inward. Neaux's engaging 8-song album establishes them as a band to look out for. 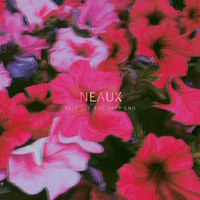 Neaux - "Fell Off The Deep End"