2016 was one of our busiest years yet. We continued our annual streak of releasing a Self Defense Family record, put out another amazing record by Hollow Sunshine as well as an EP compilation, and we were lucky enough to connect with Neaux and Mary and the Small Omission for their debut and sophomore releases, respectively.

Thank you for your support of us and of our bands. We're proud of them and their releases. We're now looking forward to an exciting 2017 with releases forthcoming from Neaux,Other Houses, Self Defense Family, Hollow Sunshine and others. Check out our recap of 2016 below.

Mary and the Small Omission - The Effects Are Cumulative
Mary Brulatour (Self Defense Family) and...

The three EPs compiled on this release betray inspirations ranging from the spiritual-minded prog of Popol Vuh to Joni Mitchell’s late-in-the-game experiments in rhythm and atmosphere. The pensive Coward casts a long, paranoid shadow, Leader’s buoyant pop almost seems to defy gravity, and Omega burns the whole script in a psychedelic fever.

This is the first time Coward + Leader + Omega will exist in a physical format. Whether heard together or separately, they demonstrate incredible range from the duo of...

We are proud to announce the Iron Pier Mini-LP Series, a collection of mini-albums to be released on limited 12" vinyl and digital download. The first entry, Hollow Sunshine's dark electronic album Bible Sea, will be released July 29th. The second entry, due in stores September 9th, will be Self Defense Family's roiling post-punk record Colicky. More releases will follow in 2016 and in 2017. 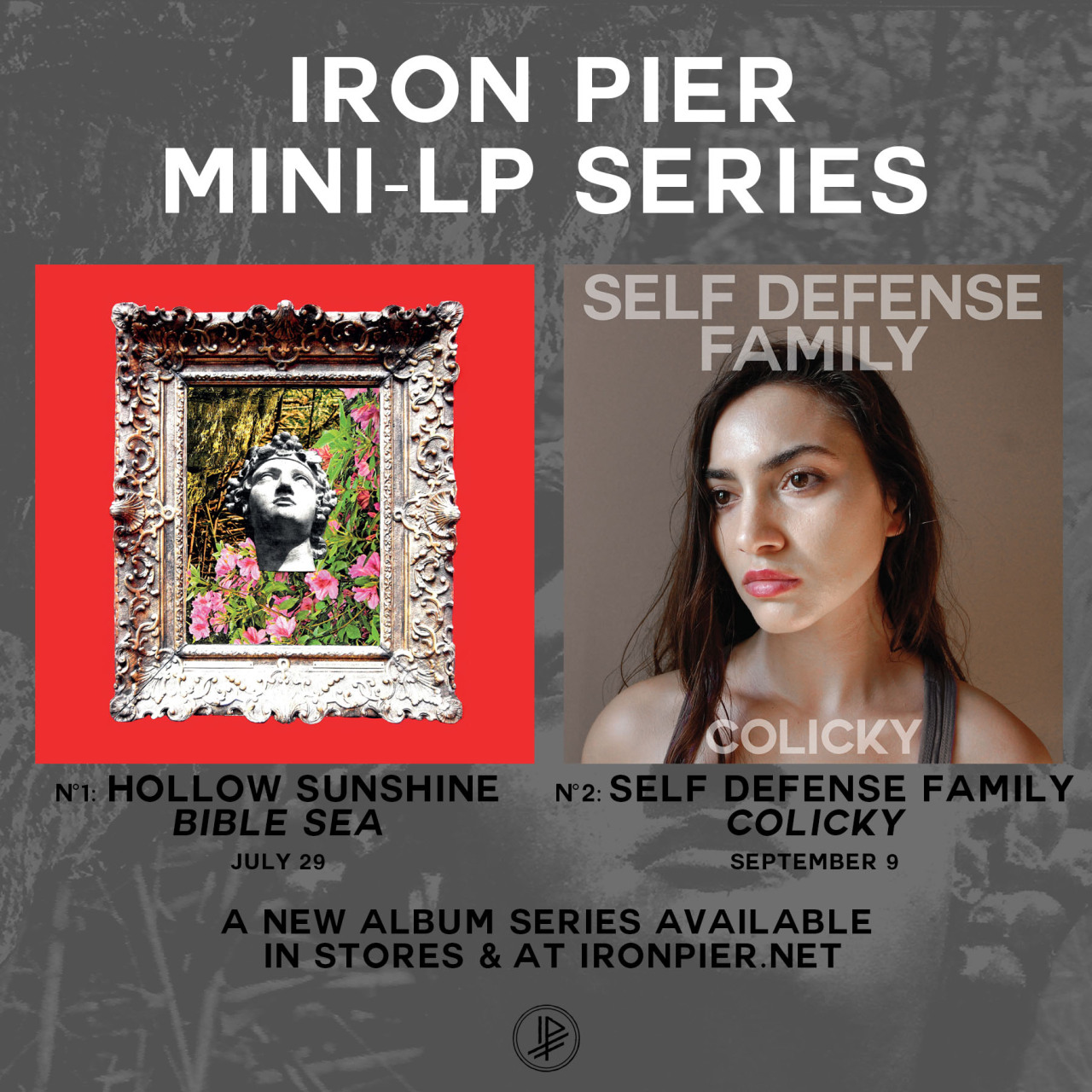 Colicky is the new Mini-LP by acclaimed cult independent band Self Defense Family. A dark, roiling post-punk gem written during a time of personal turmoil, Colicky is the group’s jagged, unflinching look at the disintegration of love and intimacy. The result is a tight and eclectic mini-LP that ranges from cerebrality and coolness to measured chaos.

The first single from the album “Brittany Murphy in 8 Mile” is now streaming at Brooklyn Vegan, along with a discussion of the song and album with SDF singer Patrick Kindlon. Brooklyn Vegan says of SDF “there’s truly no other band quite like them.”

In contrast to Hollow Sunshine's previous LPs Held Above and Bring Gold, Bible Sea ditches all semblance of a rock band in favor of disfigured samples, 808 sequences, and driving industrial percussion. A harsh, otherworldly musical atmosphere is soothed by Enos’s melodic vocal approach. Enos sees the lyrical theme of this lush darkwave masterpiece as "spiritual weaponry" while main instrumentalist Reuben Sawyer says that the sounds are "cold and alienating, which is a good thing...the vocals remain sensitive while the music is buried in...

New on Iron Pier: Mary and the Small Omission "The Effects are Cumulative" 24 May 2016

Iron Pier will release the new record from Mary and the Small Omission, The Effects are Cumulative, on June 10th. 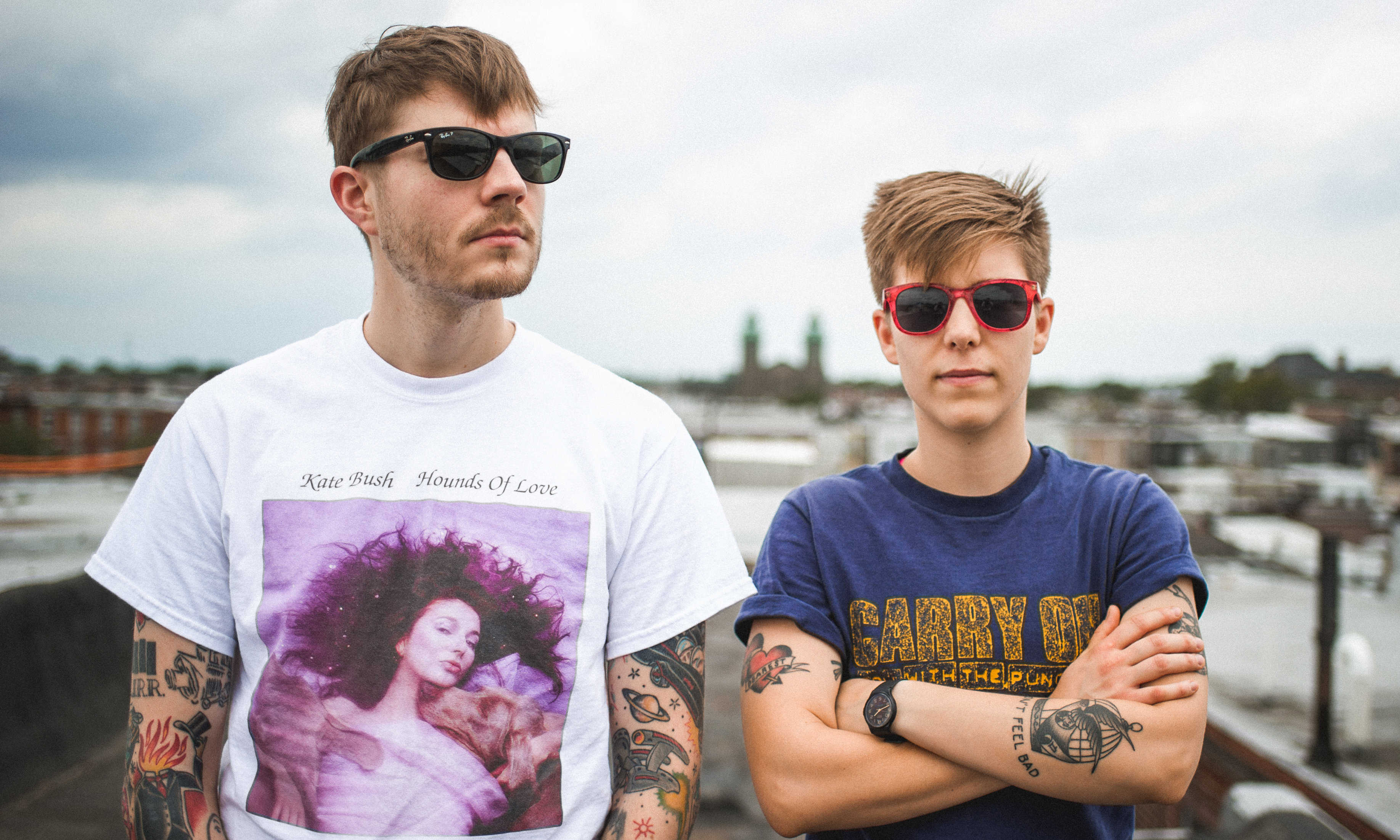 Mary and the Small Omission is Mary Brulatour (Self Defense Family) and Steve Price. Together, the duo craft a compelling mix of intimate bedroom dreampop, ambient soundscapes, and electronic loops.

Cassette, digital, and merch preorders are up now at Iron Pier.

You can check out the premiere and write-up of the music video for "Rabbit Mask" now at Flood Magazine.

Wild Moth and the Iron Pier record label are excited to premiere a new music video for the Wild Moth song “Buried,” which comes from the Bay Area post-punk band’s recent full-length, Inhibitor. Featuring stop-motion animation, the video creates a world both grotesque and beautiful and channels the turmoil of the band’s recent life changes. Watch the video for "Buried" now via Impose Magazine or directly on YouTube.

After finishing their US tour for Inhibitor, Wild Moth had to struggle with their interpersonal relationships as well as how the band should work when a founding member moved across the country to New York. Drummer Cal Tung says: “In our...

Today on our new blog: a collection of songs put together by Alan Huck of Self Defense Family, partially inspired by the band's new release with Iron Pier, When The Barn Caves In and centering on drummers. Alan's photography work graces the front and back cover of the new single, and the B-side, "Alan," is named for him. A multi-instrumentalist, Alan put together a selection of songs inspired by his experience recording When The Barn Caves In titled "No Strings."

Alan writes: "I don't actively consider myself a drummer and bandmates know me to be somewhat of a curmudgeon when it comes to actually playing them, but there are certain players who make me want to...

"It's Better This Way": Making a Photo-book for Self Defense Family 18 December 2015

Iron Pier recently published a low-run 5"x7" perfect-bound photo-book of tour photos by Kai Stone of Self Defense Family, It's Better This Way. The book was paired with the limited Iron Pier mail-order-only vinyl color-way of the new SDF single, When The Barn Caves In, with the remaining few photo-books to be available just through the band. The polaroid-style photos are intimate and stark in appearance but warm in spirit, showing everyday moments of the band on tour. They show them at Magpie Cage studio recording WTBCI with J. Robbins, at Mary's family's farm, and on the side of many highways. The style of the polaroids inspired the production: The idea was to create something limited, fun, and memorable, something tangible to...